Here it is the peak of summer and it won’t be long until kids are back in school.  There are lots of great events in and around Canyon Lake this weekend for kids, adults, and especially music lovers.  Get out and enjoy! 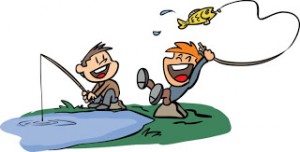 It’s time for the annual Kid’s Fishing Derby again at Holiday Harbor.  Bring the kids out and see who can hook the biggest fish.  There will be awards, food, instruction and a full day of fun for the whole family.  Registration is from 6:00 am – 8:00 am at Holiday Harbor.  Check the Friday Flyer for more details.

Friday nights at the Country Club and Friday and Saturday nights at the Lighthouse feature great 2 for $20 dollar menus.  You get soup or salad, entrée, and dessert for 2 people – it’s pretty hard to be for a cheap date night.  There’s usually a little bit of on stage entertainment as well including the band “Luv Bucket” tonight at the Country Club.

An event designed to promote community involvement and awareness.  Police and firefighters will be on hand to provide information on crime prevention and safety.  There will be a police K-9 demonstration and picnic.  Activities are planned at La Ladera Park 2:00 – 4:00 and Discovery Park 5:00 – 7:00.

Catch this one-of-a-kind rock band from Omaha perform some of their best hits like “Amber”, “Love Song”, and “Down” among others.  Also hitting the stage tonight with 311 are Cypress Hill and G.Love & Special Sauce.  Should be a rowdy night for all you rockers and rappers out there.  Tickets are available online for $19.50 and up.

Bring your appetite for this 3rd annual event that features over 50 food trucks all in one place.  There will also be over 60 craft beers to enjoy with your food in addition to other beverages offered by vendors.

Since you’re going to San Diego to feed your face, why not swing over to Petco Park and catch a ball game?  The Yankees flew a long way for this series so go check ’em out Friaday, Saturday, or Sunday. 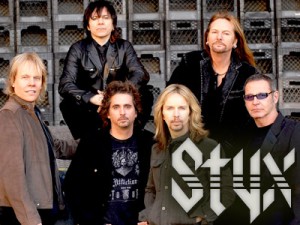 The OC fair has been in full swing at the Costa Mesa Fairgrounds for almost a month and the musical entertainment has been top notch this year.  This weekend you can catch Styx with Tommy Shaw and the boys at the Pacific Amphitheatre.  Since 1999, Styx has been touring almost continuously and have performed live more than all of the previous years.  There are also 3 great tribute band performances this weekend honoring Sublime, Pink Floyd and The Beatles.  Check the Fair website for official times, tickets and info.

*Featured Image Attributed to US Army Corps of Engineers 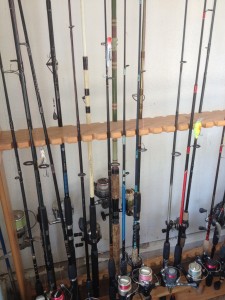 Canyon Lake has a reputation as one of the best fishing lakes in California with many anglers who really enjoy the thrill of the catch in the lake’s well stocked waters.  Canyon Lake So Cal recently interviewed two such fishermen, Lance and Lee, who shared a little information about what they like to catch and where they like to fish and a few tips about bait and gear:

CLSC:  How long have you guys been fishing Canyon Lake?

CLSC:  How many times a week?

CLSC:  What’s your favorite part of the lake to fish?

Lance:  Depends on the time of year – we travel around the lake.  If we aren’t catching much we move to a better spot.  Our best areas are Sierra Park, Ski Jump Lagoon, Harrelson Park for Catfish.

CLSC:  At Ski Jump Lagoon are you shore fishing or tube fishing?

Lee:  Both, but mostly shore fishing.

CLSC:  What kind of fishing do you like to do the most – boat, shore, or tube?

Lance:  It just depends on where the fish are hanging out. Today 3 of us were on the boat and we caught 19 fish.

Lee:  This time of the year (late spring),  a lot of fish are near the shore so we stay close to the shoreline on the boat or fish off the banks a lot.

CLSC:  What kind of fish are you after this time of the year?

Lance:  Mostly bass for us right now, that’s we like to fish for most of the time because they put up a great fight.  Late at night, we go after the catfish.

CLSC:  Is this the best time of the year to fish for bass?

CLSC:  What about in the winter time?

Lance:  Whatever we catch.  We still catch a lot of bass, but it’s slower.

CLSC:  What size fish you catching these days?

Lee:  He caught a six and a half pounder today.

Lance:  Yeah, it was a six and a half today.

Lee:  Usually they average about three to four pounds.

CLSC:  What are you fishing with?

Lance:  We use shad to catch our bass.

Lee:  We catch a bunch of shad, keep them in the live well, and then hook ’em up as bait for the bass.  They swim hard and the bass go after ’em.  The guys in the fishing tournaments out here aren’t allowed to use shad.

CLSC:  What’s the best time of the day to fish?

Lance:  Morning and evening from 3:00 until the sun goes down.

CLSC:  Is Canyon Lake easy fishing or some of the best fishing you’ve done?

Lee:  You’ll catch a lot of fish here.  Last year around this same time we caught 200 fish in one week.

Lance:  I took a week off last summer and caught 80 bass in one week.

CLSC:  What rules about fishing in Canyon Lake should people know about?

Lee:  It’s catch and release for anything under 12″.  You’re take home limit is 5 fish.

Lance:  We catch and release all our fish like most of the guys here, but you can eat ’em and they’re good eating – both the bass and the catfish.

CLSC:  What about fishing licenses?

Lance:  You have to have a state license.  Visitors can only fish in the presence of a property owner and then they need a state license and Canyon Lake fishing permit.

CLSC:  What’s one of your favorite spots?

Lance:  At the north end of the main lake near the 3 tubes from the slalom lake.

CLSC:  Anything else you want to add?

Lance:  It’s all about catching the fish and having fun. 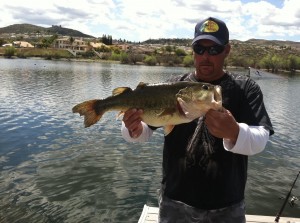